CMOP PQITs collected data through April 2017 demonstrating an increase in time to treatment and control over the course of Phase III of the CMOP initiative from 67% to 78%. 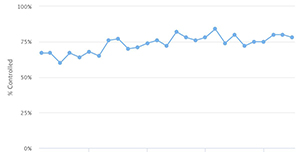 CMOP teams paused data collection for three months in the summer to focus on sustaining prior gains.  At the May 2017 Learning Session, PQITs reviewed successful measures to date and created a three month intensive work plan. PQITs are now collecting and entering data for the month of August to determine if their work plan and prior successes were able to be sustained.  Final CMOP data will be reviewed at the PQCNC Learning Session on September 13, 2017.