The opioid epidemic is a profound public health crisis. In 2014, 92 million, or 37.8% of adults in the United States reported the use of prescription opioids. This and the availability of illicit narcotics fuels the crisis. Escalations in opioid use have been particularly profound among women of reproductive age. A greater prevalence of comorbid psychiatric disorders, gender-based violence, physical and sexual abuse, and chronic pain disorders likely contribute to disproportionate rates of opioid use and misuse among women compared with men. These demographic shifts have contributed to the rising prevalence of opioid use disorder during pregnancy.

Pregnancy-associated morbidity and mortality due to substance use is a major patient safety issue. Pregnancy is a unique opportunity to address the complex and often challenging health needs of women with opioid use disorder and provide interventions that can improve maternal and child health well beyond the perinatal period.

Team registration underway...
May 24, 2021 - Registration is now open for the statewide Comprehensive Lessening Opioid Use Disorder (clOUDi) Prenatal Pilot initiative.  Prenatal clinics will be working together to address the challenges of opioid and substance use Read more...
Expert Team work drawing to a close...
April 29, 2021 - Experts from around the state engaged in the outpatient care of mothers with substance use disorder have partnered over the last 3 months to develop a clear and concise action plan to guide prenatal care teams in this work. Read more...
Results 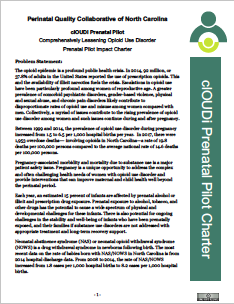