The opioid epidemic is a profound public health crisis. In 2014, 92 million, or 37.8% of adults in the United States reported the use of prescription opioids. This and the availability of illicit narcotics fuels the crisis. Escalations in opioid use have been particularly profound among women of reproductive age. A greater prevalence of comorbid psychiatric disorders, gender-based violence, physical and sexual abuse, and chronic pain disorders likely contribute to disproportionate rates of opioid use and misuse among women compared with men. These demographic shifts have contributed to the rising prevalence of opioid use disorder during pregnancy.

Pregnancy-associated morbidity and mortality due to substance use is a major patient safety issue. Pregnancy is a unique opportunity to address the complex and often challenging health needs of women with opioid use disorder and provide interventions that can improve maternal and child health well beyond the perinatal period.

Each year, an estimated 15 percent of infants are affected by prenatal alcohol or illicit and prescription drug exposure. Prenatal exposure to alcohol, tobacco, and other drugs has the potential to cause a wide spectrum of physical and developmental challenges for these infants. There is also potential for ongoing challenges in the stability and well-being of infants who have been prenatally exposed, and their families if substance use disorders are not addressed with appropriate treatment and long-term recovery support.

The Perinatal Quality Collaborative of North Carolina will address this through an initiative that addresses issues relevant to the care of both moms and babies.

A renewed commitment
January 18, 2023 - Facility teams with a demonstrated concern and commitment to comprehensively lessening opioid use disorder impact gathered for a full day of collaborative work in Raleigh NC for the kickoff of clOUDi 3.0. The morning was spent Read more...
Complementary Work in the West
July 3, 2022 - In response to the lack of options for maternal SUD treatment, Blue Ridge Community Health Services (BRCHS) launched a program for comprehensive, gender-specific, trauma-informed perinatal and postpartum SUDs care at its Polk Read more...
Results 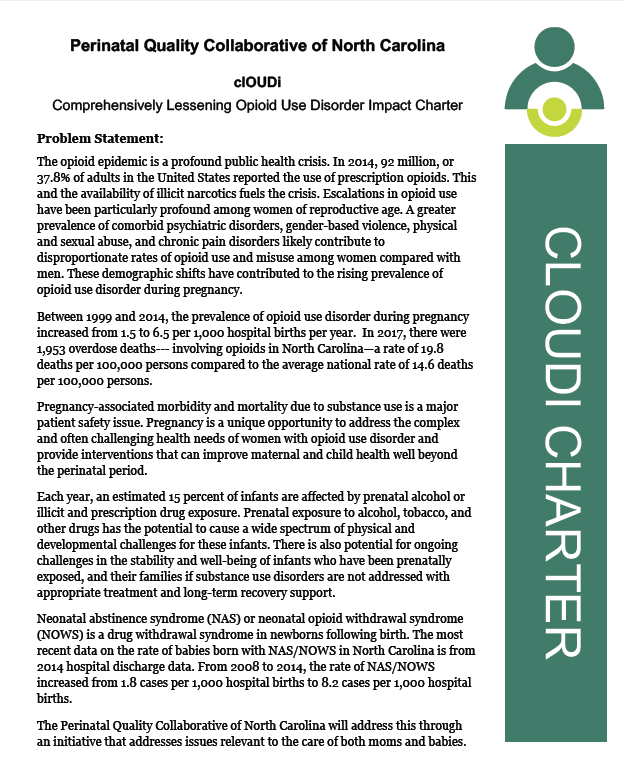