Over the past 12 months, nurseries reduced antibiotic exposure by 50% saving exposure for over 1100 infants.  However, the most profound outcome of the initiative was the collaboration our teams experienced demonstrating once again that state collaboratives are THE venue for rapid high impact quality improvement work.  Neonatologist were engaged and eager to learn from Pediatricians and many times it was the nursery leading the way for the NICU. The catalyst of integrating the sepsis calculator on infants in newborn nurseries spread such practices as defining at-risk guidelines for all infants, adopting a 36 hour stop time if cultures were negative, and adapting sepsis order sets to include treatment by doses versus treatment length that varied by provider.  Some teams even replaced their current GBS order sets with the Kaiser sepsis calculator, integrated the risk score in their EMR and created sustainable, system changes that will impact all newborns greater than 34 weeks, long after this initiative comes to a close.

These accomplishments were not easy but all ASNS teams were successful as a result of their dedication to improve care, willingness to share lessons learned and most importantly, collaborate across unit lines.

The End of Data Collection - Time to Review and Reflect
December 27, 2017

December 31, 2017 marks the end of data collection for participating ASNS PQITs.  Fifty two Newborn and/or NICU teams of varying sizes submitted data on their antibiotic management of suspected early onset sepsis covering over 75,000 infants and approximately 60% of the births in North Carolina since November 2016.  PQITs will be summarizing their data and reviewing interventions implemented to support and sustain their stewardship efforts.

Many PQCNC ASNS teams partnered with parents to enhance their antibiotic stewardship efforts.  Parents provide a wealth of knowledge in guiding teams to a deeper understanding of information that is helpful when their infant has been prescribed antibiotics.  Additionally, educating parents about the appropriate use of antibiotics allows them to carry that knowledge forward into the pediatrician’s office and into their own lives.  Several ASNS teams collaborated with parents to create tools to enhance parent understanding of antibiotic use and to engage them in their infant’s care. 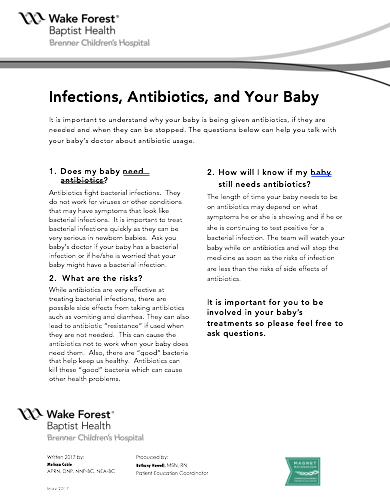 September 21, 2017 will bring the second Learning session for the PQCNC ASNS initiative.  ASNS PQITs are actively implementing measures of the action plan and the Learning Session will provide a venue for large group discussion regarding barriers and successes in their journey to date.  Two PQITs will discuss case presentations specifically regarding the implementation and use of the Kaiser Sepsis Calculator and a third PQIT will discuss revisions made to their EMR to accommodate proper documentation of stewardship efforts.

Use of the “Triple I” will be discussed as will the pharmacokinetics of antibiotics in neonates. Family partners will also be speaking to how to engage patients and families in antibiotic stewardship to improve care and the understanding of the importance of the appropriate use of antibiotics that extends beyond hospital discharge.

As ASNS PQITs work to decrease antibiotic use in newborn and NICU infants, many different measures are being implemented to aid in accomplishing this goal.  Some teams began by defining at-risk criteria to determine a need for antibiotic administration while other teams implemented an antibiotic hard stop at 36 or 48 hours to automatically discontinue any antibiotics that had been ordered allowing for reassessment of the need to continue treatment.  As one measure is implemented and sustained, teams are moving on through the ASNS action plan to implement additional measures to decrease antibiotic use.

The results of these measures have demonstrated a decrease in overall total days of antibiotic therapy both in the Newborn Nursery and in the NICU.  From the beginning of the baseline period of ASNS in November 2016 through May 30, 2017, nearly 28,000 newborn nursery infants and 6,500 NICU infants have been touched by the work teams are performing around ASNS. 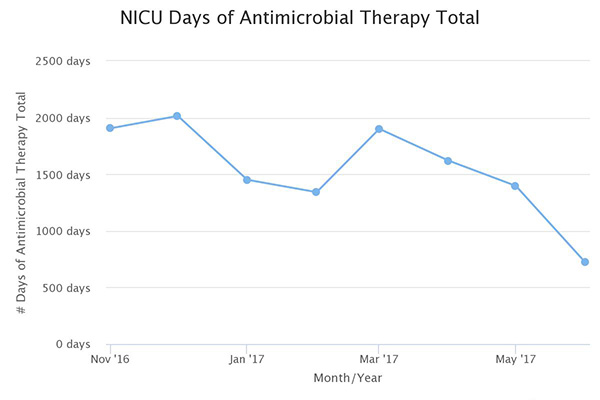 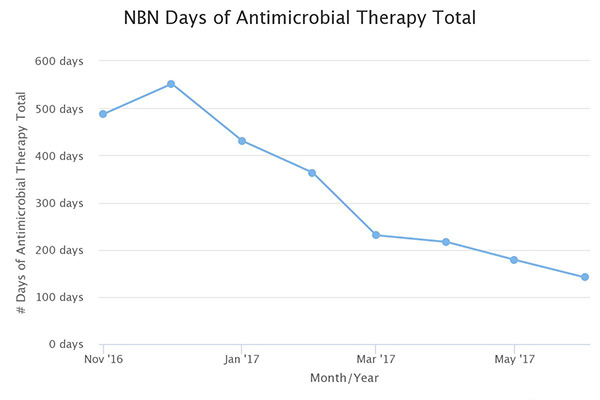 The term “Chorioamnionitis” is outdated and overused…
June 22, 2017

As we focus on early onset sepsis in the newborn, the maternal diagnosis of chorioamnionitis inextricably results in antibiotic exposure in this population; sometimes unnecessarily.

PQCNC recently shared new guidelines with ASNS teams that attempt to thwart the ubiquitous and often vague diagnosis of chorioamnionitis.  Sharing a 2017 publication by the American College of Obstetrics and Gynecology outlining a new classification to accurately diagnose and manage potential infections in pregnant women and their newborns, teams were introduced to the new term “Triple I”.  This more descriptive term stands for intrauterine inflammation or infection or both, abbreviated as the "Triple I.” Overall, the improved precision in the clinical diagnosis of intrauterine infection may better identify mothers and infants most at risk for sepsis and enhance the quality of clinical treatment decisions.

PQCNC will continue to educate teams on this new classification at the next face to face learning session by providing an expert speaker to present on Triple I.

Early Results Show Reduction in Exposure of Newborns to Antibiotics
May 17, 2017

Early results: Baseline data collection showed an antibiotic exposure rate for all newborns in ASNS of 12.9% for both Newborn Nursery and NICU.  As ASNS PQITs continue working towards implementing various elements of the ASNS action plan ongoing data collection shows an antibiotic exposure rate of 6.1% for all newborns in ASNS.

Growing number of webinars for team training and support
April 16, 2017

Recorded webinars can be found on the PQCNC website for use during team or staff meetings to assist in educating providers on elements of antibiotic stewardship and the ASNS action plan.  Webinars include:  Setting the Stage for Family Engagement in ASNS, The Life of a blood culture, Antibiograms in the NICU, Antibiotic Timeouts, Effective Handoffs, Implementing the Kaiser Sepsis Calculator and a demonstration of the Kaiser sepsis calculator to determine sepsis risk score.  More will be added as the need arises to provide a continual source of education and support to NC PQITs.

Implementation varies from utilizing the tool on infants who have been born to a mother with a chorioamnionitis diagnoses, to full implementation on all infants greater than 34 weeks regardless of diagnosis.  Some teams have collaborated with their information technology (IT) department to ensure the tool can be conveniently accessed in their electronic medical record including one team that was so successful in achieving this IT integration, they will be presenting their work at a national conference in the Fall of 2017.  Whatever the method, teams are working to change clinical practice and ensure the Kaiser sepsis tool becomes common practice in their culture.

Enrollment in the PQCNC Antibiotic Stewardship/Neonatal sepsis initiative continues to grow including newborn nurseries and neonatal intensive care units across North Carolina as well as Virginia, Hawaii and Italy.

The kickoff meeting for the PQCNC Antibiotic stewardship/Neonatal sepsis initiative was held on January 10, 2017 with over 120 members in attendance.  Presentations were provided by Dr. Michael Cotten, Dr. Carl Seashore and Dr. James Perciaccante on the principles of antibiotic stewardship and the use and implementation of the Kaiser sepsis calculator.  Additionally, two parents, who are members of their hospital perinatal improvement teams, provided their perspective on antibiotic use for their children during their NICU stay.

The kickoff meeting signaled the end of the baseline data collection period and teams have now begun to implement different aspects of the action plan for antibiotic stewardship with the majority of teams concentrating on the implementation of the Kaiser sepsis calculator for infants greater than 34 weeks gestation.  Data is being collected on the rationale for antibiotic prescribing, continuing antibiotic treatment with a negative blood culture and overall antibiotic usage to allow teams to understand their prescribing practices and treatment options more completely.